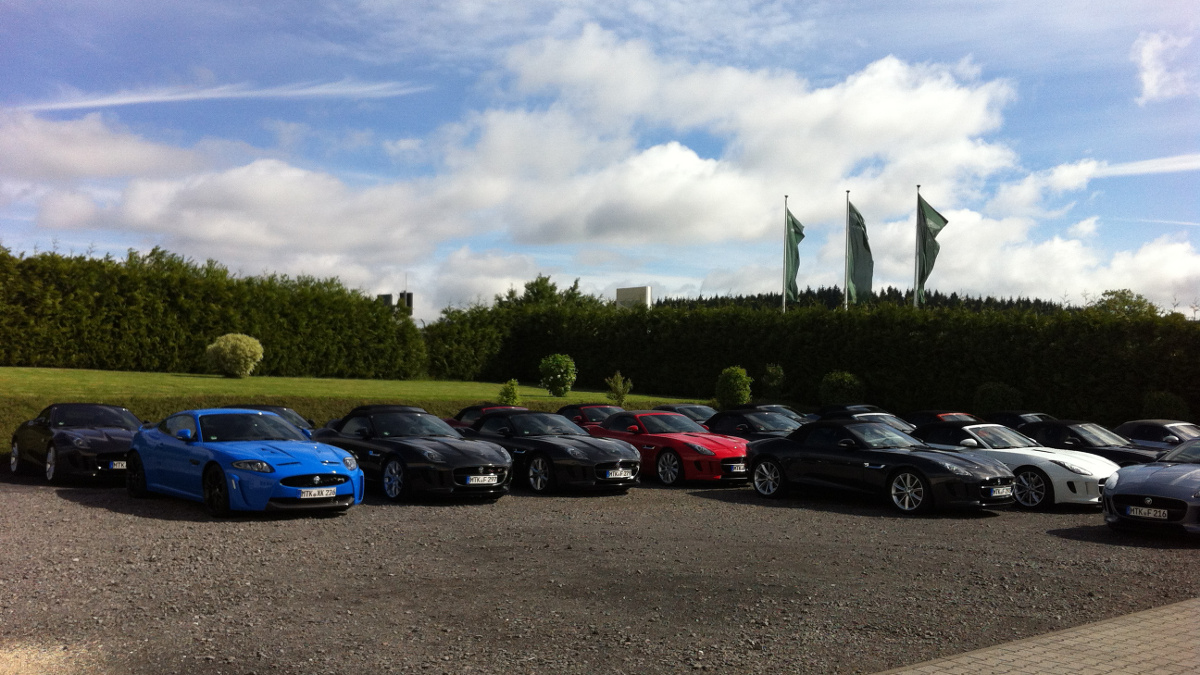 Nestled in North-West Germany, within earshot of the Nurburgring race-track, Jaguar Land Rover have established a crucible of car-craft, where the secret ingredients are added to the potent mixture that seems to bring a Jaguar to life. We went along to discover more about this remarkable facility.

Sitting silently in the corner of the workshops, two lonely Germanic exemplars rest together, watched carefully by the surrounding pride of Big Cats. The blue one, considered by many as the best super-saloon in the world, next to the brown one, often regarded as the best sports-car in the world. Their very core has been stripped, examined, tested and found wanting. It cannot be denied that these German benchmarks are very good cars, but that is all they are. And huddled in the corner they remain.

Holding court in the centre of the workshop sits a vision of experience and wisdom. Shrouded in a dark hood and matte-black cloak, the one model that has seen and done it all – the test-mule. Fashioned in the style of an XK convertible, the mysterious elder bears the scars of past mistakes, but its stitches only serve to emphasise the knowledge locked within.  Each journey it makes is a journey of discovery, bringing new insight to the dedicated team of engineers who practice their craft here.

In three parallel bays, along one side of the workshop, three very different cars rest, waiting for the attention of their master. In the first bay a black XF saloon sits almost visibly breathing as it awaits a service to prepare it for track duty. The racing harnesses in the back seats are there to strap in passengers before taking them around the Nurburgring at whirlwind speeds. This is one of Jaguar’s ‘Ring-Taxis.

Beside it, sits the attention grabber. A bright blue Rocket-Ship. At least I think that’s what the “R-S” badge stands for. Built for speed, and adorned for show, the XKR-S screams, even when it’s standing silent and still.

Descending from its lofty position atop pneumatic ramps, Jaguar’s champion makes an heroic appearance. The F-type, Jaguar’s first dedicated 2-seater roadster since the E-type, has a pretty tough act to follow. It’s been over fifty years since its predecessor entered production – and the gilt-edged pages of history –  but the F-type isn’t stuck in the past. It is modern in every detail and, as befitting a Jaguar, beautiful from any angle. Jaguar say they have instilled the Essence of the E-type, into this stunning new car, but sitting there quietly in the workshop, it’s difficult to see what, exactly, they mean.

An engineer from the workshop led us out to the car-park at the back of the workshops. Around twenty F-types, with a few XF’s and XK’s thrown in for good measure, were parked up, ready to be signed-off from their testing programme.

It was still a little strange to hear the engineer refer to the “Spirit of the E-type”, when chatting about this thoroughly modern car. There was a time when Jaguar harked back to its past with every design in brought out, but its award-winning Design Director, Ian Callum, has gradually (and very successfully) moved Jaguar out of that rear-ward looking mind-frame.  As we explored every inch of the F-type, the “Spirit of the E-type” was nowhere to be seen. Until the engineer started one up.

Ah… There it is. The sound of the F-type can only be described as Old-School. The way a British roadster is supposed to sound. At a tame idle, it purrs with a throaty rumble that conjures up images of a Spitfire on a green field in rural England. Blip the throttle and it snarls and spits, like a wild beast straining to be unleashed. No wonder the German rivals were cowering in the corner of the workshop.

Sadly, as the circuit was open to the general public that day, the engineer was unable to take us out to unleash the beast on track (other drivers are too unpredictable for it to be safe enough), but it was a real privilege to be given the opportunity to see where the car has been given its training. This facility allows the masters of the black-art of Engineering to indulge in their craft so that those drivers, who want more than a great car, can experience a Jaguar.

We’d like to thank the staff at the Jaguar Development Centre for taking the time to speak with us and make us feel so welcome there.